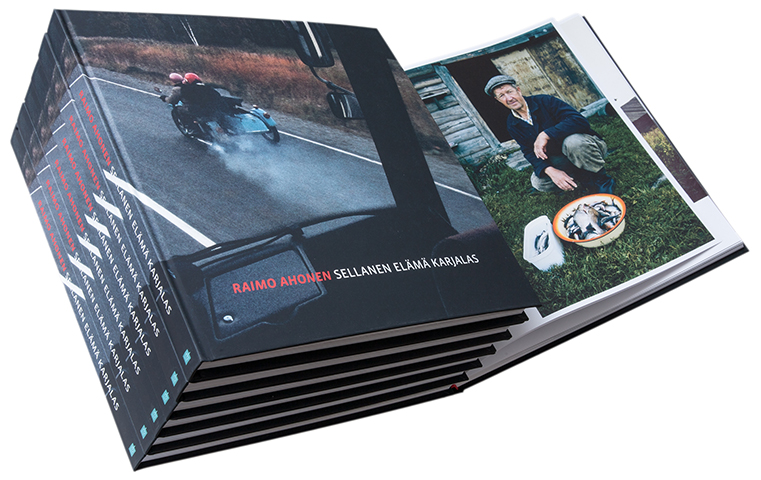 15.1.2016. - - - I recommend strongly. A very beautiful book with lots of beautiful photographs by Raimo Ahonen.
In 1998 we made a trip from our Department of Architecture to study the Kinerma village and the area around in Russia with Mr. Ahonen and my fellow students and others. - - -
Simo Nuojua, architect

1.4.2015. - - - There are many levels in this book: a touch of a travelogue, scaling from a silent, grey village to an everyday cityscape, but there's already a story in every picture itself. Not only it's a wonderful book but every picture is a masterpiece of it's own. I'm especially attracted to the black&white pictures. It feels like the time has stopped. - - -
Anu Soikkeli, architect, lecturer

1.3.2015. - - - Ahonen is a sensitive-eyed documentarist, who senses the atmosphere of the place very well. He doesn't gimmick or fall for cheap nostalgia. The authenticity and the honest respect for the subject takes you longer - A small village grows in it's speciality as the memorial for the people living in Karelia, which is still alive, just barely. Overall the book of Ahonen is a tribute for genuineness and for forever lasting beauty.  - - -
Seppo Paajanen, critic, Etelä-Saimaa -newspaper

9.1.2015. - - - Your book about Life in Karelia has left us speechless, its images are pure poetry, so evocative and introspective, a perfect mingle of past and present in a land where nature is domineering and powerful. - - -
Carlamaria Bonomelli

24.12.2014. - - - Warm thanks and congratulations for this fine and stylish piece of work. Wonderful pictures, you can feel the direct atmosphere and friendliness. - - -
Anna-Kaarina Mäntymaa

- - - Please forgive me that I write in Italian but I can't express my delight for your pictures in English, which are so exiting. I couldn't read the book at one go because every picture moved me so deeply. At some point I even had to take a moment to take some breath. With the use of light you were able to take some plastic photos. I'm sorry that my notes aren't very significant but spontaneous.  - - -
Iris Galli

21.12.2014. - - - A high-quality photographical artwork is an ode for Kinerma and it's people. The texts and pictures in the book complement each other and they touch everyone. It's hard to describe the meaning that must have to the dwellers of Kinerma and their descendants. To others it is a fine piece of photography but to us it's a part of ourselves that connects us to the history of Kinerma and to the upcoming generations.  - - -
Olga Gokkoeva

8.12.2014. - - - Thank you for this fine book! The books that have been made using a film are becoming more and more rare, which only makes this book stand out with it's contrast. Karelia is pretty unknown for me but of course I know the work of Inha and Pälsi. Your work stands right next to them. - - -
Pekka Päivärinta

December 2014. - - - Raimo's magnum opus has been gathered from a long-term, in-depth research and from a huge interest for Karelia. The pictures of the book can be read as pictures of landscape, milieu or as objects or maybe just portraitaukeama. The way that Ahonen photographs people and communicates with them sometimes has them participated but sometimes he just observes things from a distance in tranquility. - - - The book proceeds as an life-understanding journey trough the misty spreads of Kinerma to the bars of Petrozavodsk. - - -
Heikki Kastemaa, critic, Magazine Kaltio 6/2014

19.7.2014. - - - The photographical book THIS IS LIFE IN KARELIA started from a trip to Karelia made by the student of architecture. Ahonen says that he is not a romantic adorer of Karelia but the journeys to Kinerma, locating northeast from the lake Ladoga, in the years 1998 to 2010 made him realize: What kind of a life do these villages have? A collection of photos were taken and they have been presented all around the world in various exhibitions. "It has felt like a time trip to the 50's", writes Ahonen. And that's what it is. The village and it's people rise expressionlessly from the shadows of history described accurately. It takes a while before the pictures open but after that they give so much. A great artwork. - - -
Eeli Aalto, artist, film director

25.3.2014. - - - It's a fine, lively kind of Karelia unlike some of the desperate tries that I see. You can see the passion for the subject, great pictures! - - -
Elina Heikka, museum manager, The Finnish Museum of Photography

17.3.2014. - - - Thank you once again for your work that is this great book. It's without denying quite of a milestone from the period of 15 years. I myself noticed that the Kinerma that was 15 years ago has been forgotten deep in the history, for the part of buildings and people (Anastasia). - - -
Roman Gokkoev

March 2014. - - - The face of the book makes you want to stroke it - the black parts of it look so deep velvety. The content is magnificent, not only for the size but for the diverse pictures. Raimo Ahonen has been following the life of Karelia for years. He's pictures radiate deep respect for deteriorating wooden houses and for the dwellers who live so simple. Most of the pictures are black&white, all photographed on film. Mist, a guard dog on top of it's doghouse, a pile of potatoes on the plank floor. Moody but beautiful. - - -
Minna Jerrman, journalist, Kamera-magazine 3–4/2014

7.3.2014. - - - It's like going back to the Finnish agrarian time.
When a person who has oriented himself to the history of architecture, documentary photography and to graphical design publishes a book, there's going to be moments where the pages turn in silent respect. This photographical work of Raimo Ahonen is a movie-like trip to Karelia's village Kinerma. - - -
Pia Kaitasuo, journalist, Newspaper Kaleva

26.2.2014. - - - Hello and a big thanks for you your book THIS IS LIFE IN KARELIA!
You have managed to produce a great book from your trips to Karelia. When you even a bit of your own background, you can believe in the saying "a picture tells more than thousand words". To us every picture you have taken from Kinerma is a story itself and every other picture adds up to that, in their own way. - - -   - - - To us, my wife and me, especially the Kinerma part was very close. - - -
- - - You can be sure that the pages of your book will wear out of the use that we give to it. - - -
Antti Hanelius

26.2.2014. - - - Your book goes to the TOP 5 list of the books that I have printed. With Männikkö, Kaila and Turunen. Thank you for letting me be involved.
Unto Liimatainen, printer, Erweko Oy

26.2.2014. - - - A great book once again Raimo.
The pictures stuck to my mind: the one where the cat lolls on the railing when the sun shines. Even though life isn't always sunshine, especially not in Karelia.
Thank you ones again, good luck to the road of the opus. - - -
Sauli Pesonen, executive director, Oulu Film Centre

25.2.2014. - - - I haven't had time to get in to the text parts yet but during the examination of the pictures I was thinking that here we have a small piece of Kinerma on paper. Among other things. The pictures also woke up some memories from the trips of my own. Wonderful atmosphere, wonderful piece! - - -
Tiina Sipilä